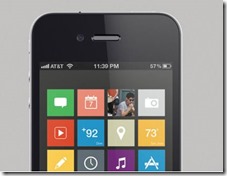 There is no doubt that iOS is in desperate need of upgrading. It has been around too long in it’s current state. Android and more specifically Windows Phone have a much more intuitive and modern look. Apple even borrowed some of Androids notification goodness in iOS 5. Now it seems that Apple may borrow some of Microsoft’s Metro UI flava for it’s own in the upcoming release of iOS 7. 9to5Mac is stating that multiple sources are claiming the new interface and general design will be “very, very flat”. While other sources are stating that the new design "loses all signs of gloss, shine and skeumorphism"

Jony Ive, who is now in charge of the iOS design team is said to favor the Metro minimalistic style and bring elements of that UI into Apple’s new UI that should be previewed at the WWDC 2013. Macrumors has a pretty cool mockup of the new UI and I can already tell you I am not a fan. What makes the “flat” style work on Windows Phones is that it is now tunable to your own desire by being able to make the truly live tiles bigger or smaller and move them around at will.

If these formerly called icons could be more like Android widgets and have the scalability of Windows Phone I think it would be more of a hit. It is also being stated that the "new panels [that] swipe from the left and right side of an iOS device’s display."

So it could very well possibly be that iOS 7 falls flat in a good way, but Apple better have something more up it’s sleeve than the mocked up image or it could find it’s not so shiny new UI falling flat in a bad way.