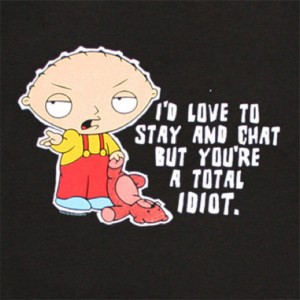 As most of you readers know, I work at Best Buy.  At Best Buy we sometimes have over-zealous vendors who like to provide us with in store representatives of their brand.  You would think major corporations would send their best and brightest to represent them in the field, especially directly facing the customers.  This is not the case.  Enter a company called Mosaic.  This company is basically manpower for large corporations to do things like customer education and sales across almost every retail channel you can imagine.  It’s not so bad an idea, except for how this business is practiced.  There are three main reasons this system sucks at getting information to the customers or the sales people that already work in the store (and are hopefully smart enough to avoid these walking colostomy bags of misinformation.)

Reason number 1.  These guys switch products whenever the hell the company decides they no longer have a product to support.  For example:  a Rep that I know of, who has worked in Best Buy several times through out my extended stay with the company comes waltzing in the other day bragging about being a Sony Rep for the upcoming holiday season.  Just last year this dude was hucking Kodak cameras like they transformed digital images into diamonds, and with about as much actual information in his sales pitch.  Not only did this guy not know anything about cameras, he viewed his job as somewhat of a pastoralist, doing nothing more than herding customers into “actual” sales people.  Anyway, he comes in and starts running his mouth like a runaway Prius, except with no hope of death in a fire, at all the sales people that are attempting to help customers (the other thing these guys are good at)  about how he had just gotten done “working” for HTC showing off the “droid” phones to Verizon stores all around the area.  Just because I’m not a total dick and want to screw with this guy at the same time, I humor him with the gift of my intellect and conversational savvy.  So which “droid” (in quotations because I can’t stand that stupid marketing campaign) he was showing off to the Verizon stores.  He couldn’t remember and wasn’t even aware of what other phones constituted a “droid”. So I rush off to help another customer in an attempt to not kick him square in the testicles for his ignorance and my frustration.

Reason number 2.  So I go on about my business (now selling cameras, mp3 players, video games, and not answering phones) and go help more people.  As I do my rage is increased as this guy pulls out a Motorola Razr (we’re talking V3, not even a newer model) and starts yapping away into his phone about how awesome it is to be working inside a Best Buy again.  Now this is a problem and if you don’t see it, let me spell it out real clear for you.  Not having any experience/hands-on time or even a healthy dose of training (which I’ll explain later) with the products he’s blindly showing into customer’s faces is just plain wrong.  If this is how carrier employees in our local stores are being trained then I can say for a fact that they probably know less after he consumed close to an hour of their life needlessly reading from prepackaged “getting started” materials.  This loss of knowledge is probably due to the carrier reps’ attempts to preform self-lobotomies in order to remove any memory of this horrible brain rape.  So why is this presentation so horrible?  You’re right… Reason 3.

Back to training.  You know how these roving idiots get programmed with stupid and useless information.  You would think some sort of group orientation or something where they all gather to learn and experience the product.  You would be wrong.  These guys get a brown box from UPS the day or two before they’re actually supposed to start working on the product.  What’s in the mysterious box?  Product? DVD instruction?  A manual?  NO!  They get the same bullshit that you can read off the box in a pamphlet of some sort along with useless and cheap pens/stickers/balloons/etc. to shove into the hands of associates and customers alike in a feeble attempt to create some sort of brand recognition/loyalty like when you walk by an Abercrombie store and almost choke to death from the spray of anthrax or perfume, which I have still not figured out due to my refusal to enter such an unpleasant place.

So that, my friends, is why you come to such an awesome website for proper information, along with some occasional humor, on your mobility product of choice, as well as the reason I drink so heavily in the evenings.  Drop me a line if you’ve ever been forced to talk to an idiot at your wireless provider of choice.

CodeRunner Will Have You Running Around The Town Literally