Ah the iPad, there’s no doubt it’s popular that’s for sure, but it’s also expensive and rather fragile. Personally if I’m going to pay four, five or six hundred dollars for something I have to have a case for it as I don’t want anything happening to it and I’ve got kids and it seems accidents always happen. if I’m going to spend that much money on a device I’m most certainly not going to want some thin silicone thing, I’m going to want some serious protection like what I have for review today, the Gumdrop Drop Series Case for iPad 3 and iPad 2. This is an iPad case that will most certainly offer you a great deal of protection and really protect your investment, this is a case I can get behind and promote. So read on to learn more and see how it looks on an iPad 3…

Shock Absorption, drop protection and hard-core readiness in one package for your iPad 3 and iPad 2.

What’s in the Box?

The box is rather cool, I like the whole natural look. There’s not much flashy to it, just a cutout window showing the back of the case.

Opening up the box you’ll see the back of the case like you saw through the front. I don’t know about you but I love the looks of this case, I like the style, it looks like an off-road tire! It’s just totally cool, and it’s a man’s case for sure! 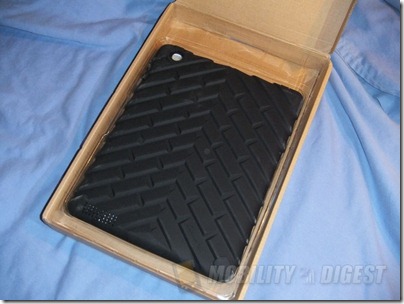 Here’s a couple better pictures of the back of the case for you: 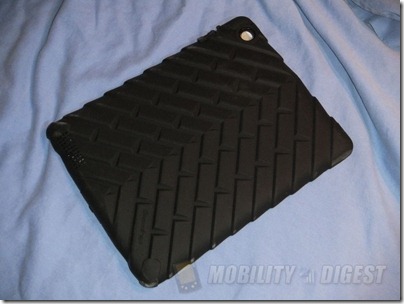 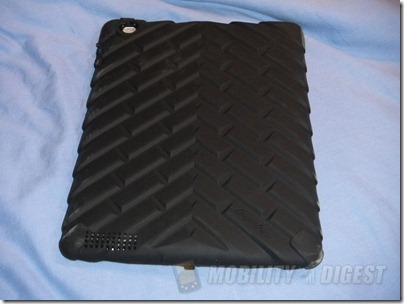 When you unpack it you won’t find anything at all, just the case with the cardboard faux iPad already in it for you to show you what it might look like.

The iPad 3 has many ports, switches and buttons so you’ll find little doors and opening for them all around the case including a cutout for the speakers. 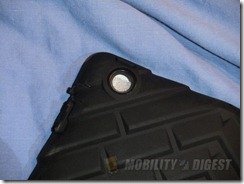 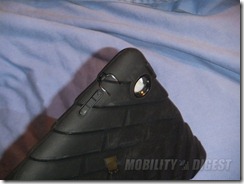 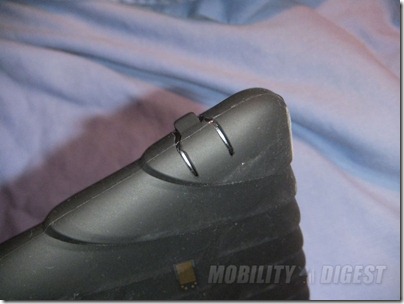 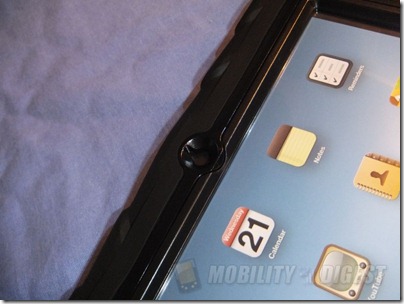 I was surprised when I started to install the case on the iPad 3 and I found out it was in three parts. It’s three parts and or three layers of protection as it were. 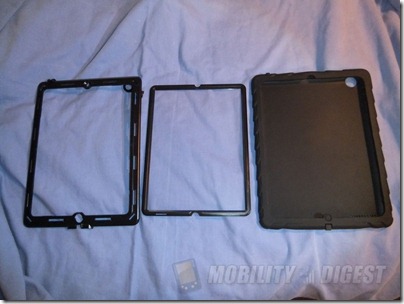 The first part is the rubber backing of course, then the center section which is actually a screen protector and then there’s the plastic frame. The screen protector is replaceable by itself so if something happens you won’t have to buy an entire new case. I think that’s a great feature myself. 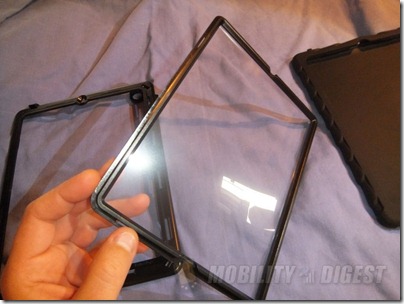 The rubber casing is actually nice and thick, surprisingly thick really, it’s about as thick as the iPad itself. 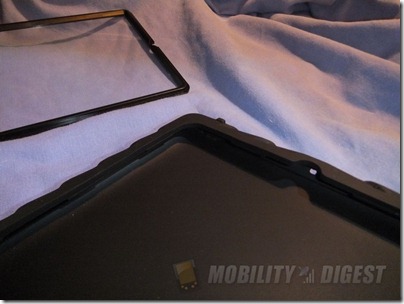 So it’s time to put the iPad 3 in the Gumdrop. Here’s a couple pictures of the iPad with the case: 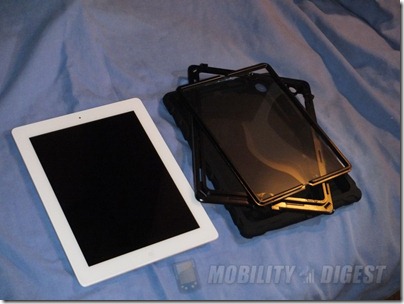 Yes you can use the built-in screen protector with one you might already have on your iPad. The first thing you’ll need to do is clip the screen protector into the frame and then you clip all of that onto the iPad. You kind of slide it in from the right side and under the camera section. 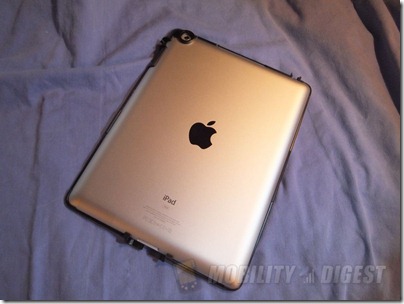 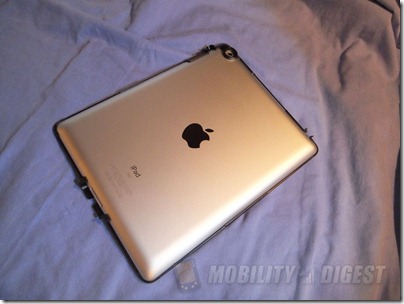 The case is reinforced around the ports, buttons and switches. 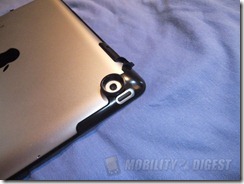 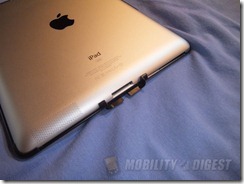 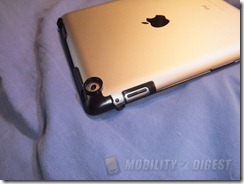 Then here’s the front, the plastic pretty much covers the entire outside edge or frame of the iPad. 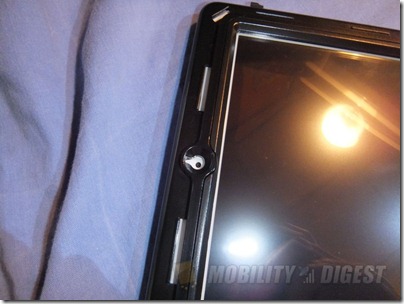 The next thing to do is slip the rubber part of the case over the entire thing, this does require a bit of work as it’s a tight fit and you really need to work at it to get it on.

Then here’s a couple pictures of the iPad 3 powered on and in the case. The iPad 3 does have a screen protector on it already and then it has the one that’s built-into the case as well and I found that it works just fine with both screen protectors in place. 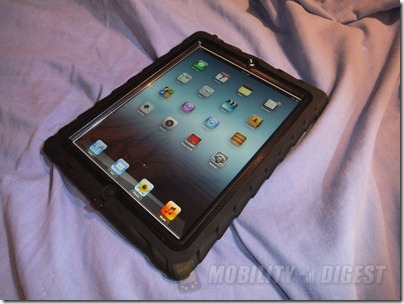 Here’s the back, kind of looks the same with the iPad 3 in it or not. 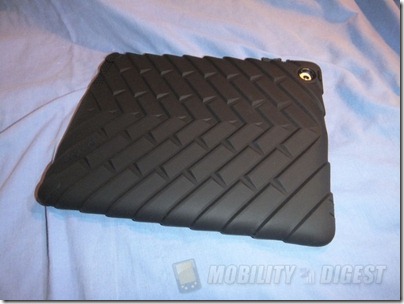 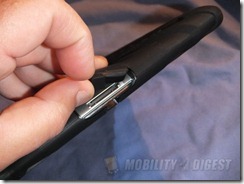 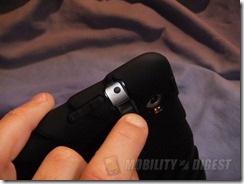 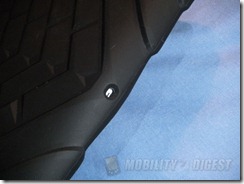 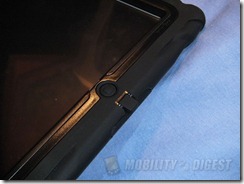 As you can see everything is easily accessible via the flaps.

The case isn’t water-proof or anything but it will keep the dust out surely and protect from bumps and drops.

It doesn’t mention anything about water resistant but after putting it together and in the process of it, it does seem to have a decent seal overall. I’m pretty sure it will keep you iPad protected from moisture, but don’t quote me on that.

The cost is a bit high, but not that much when you look at other rugged cases out there on the market today.

If you’re looking for protection for your iPad 3, then I don’t think you can do much better than the Gumdrop Drop Series case personally. I know this iPad 3 is going to be protected.

The Gumdrop case is thick so it will add quite a bit of bulk to your iPad that you might not be accustomed to.

The case is thick so chances are it won’t fit in any docks you might have and might not work with many accessories either.

If you need to take it off be prepared for a bit of work, you do have to remove rubber cover which can be difficult, and then the plastic cover needs to come off as well.

Overall I like the Gumdrop Drop Series case and I think you will too.

Cons:
-Take a bit of work to get on and off
-Might interfere with docks and accessories 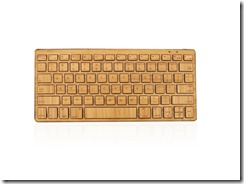 ABOUT US
Stay connected with all the latest tech news with Mobility Digest
Contact us: contact@mobilitydigest.com
FOLLOW US
© Copyright 2016 - Mobility Digest
MORE STORIES
iPad

I bet your Android Tablet friends don’t have one of these!