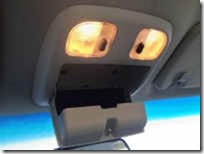 Doug Simmons: I think Google Glass is one product I would have preferred Google to make a little harder to root, given the potential validity of some of the premature criticisms voiced here and the need for Google to keep things controlled (like pre-approving all apps) in order to try to curb misuse. Even Schmidt has his reservations. Now we need to rely on XDA admins to be responsible.. anyway, hello spycam and modified (like automobile-unlocked) texting and youtube apps.

finding new loopholes but at least Apple tries. To be fair these are not retail units though so if they beef up security now they’re just giving time to breach it. Why doesn’t Google give a bounty for reporting Android vulnerabilities like it does in Chrome.

Doug Simmons: Not sure. Maybe Google’s interest in Android, unlike Chrome, is no longer so strong, rather it was just a means to get their apps and services popular. If Google’s stuff disappeared from Android and showed up on Windows Phone, you might just find me in the closest Microsoft store. Seriously. You’d find a lot of people there as well, I imagine. Then you might find me bashing Google over activesync and IP theft.