Do people still use BlackBerries?  I can’t remember the last time I actually saw someone using one. Anyway, if you’re one of the few and you need some organization on your life then you might want to check out this new app called Presta that helps keep you keep organized and get things done. 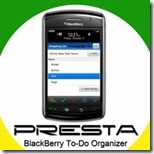 Karta Mobile Inc., the leading provider of mobile apps for Getting Things Done has announced the immediate availability of its new BlackBerry productivity app Presta™. Intuitive to use and easy to get started with, Presta is designed for everybody who wants to get things done on the go quickly and easily. With Presta users can effortlessly organize their to-dos, projects, commitments, lists, priorities and reminders directly from their BlackBerry smartphone.

Presta sports a stylish touchscreen interface, comes with a free trial from App World and is supported on all BlackBerry models with OS 5.0 or better, including OS 7. The touchscreen capabilities allow owners of touchscereen BlackBerry models like the Torch 9800/9810 and the BlackBerry Bold 9900 to perform all frequently-used actions with just a tap on their smartphone’s screen. Presta also boasts full two-way sync with the BlackBerry native tasks subsystem ensuring that any to-dos entered externally are accessible from Presta as well.

While in itself not a complete implementation of David Allen’s Getting Things Done® like Karta Mobile’s flagship application Viira and the GTD Outlook solution the Viira Outlook Suite, Presta focuses on a core subset of the principles of GTD to provide a workflow that is often referred to as “GTD lite”. Presta comes to the rescue of many people who are looking for ways to effectively stay organized without the complexity of feature-rich productivity apps or the learning curve often associated with time-management solutions. 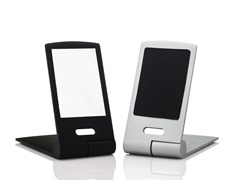