How’s that battery are your new HTC One S phone? Is it lacking? Do you find you need more power? Well PowerSkin has the answer in their new battery skin that can offer you up to four hours more run-time so you can get more done when you want to. Price is $69.99 but you can get a $10 discount between now and June 5th using promo code PSHTC123. 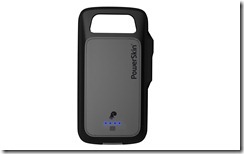 PowerSkin®, maker of shock-absorbing, battery-boosting cases for smarthphones and gaming accessories, debuted a new skin for the HTC One S today offering a $10 discount on purchases made between now and June 5th, 2012 on power-skin.com/battery-cases/ap1523vilt/htc-one-s-tmobile.html using promo code: PSHTC123.

“With the One S being one of HTC’s fastest phones launched to date, it requires an incredible pull from the battery.  The speed is impressive for any user, so we wanted to make sure we provided a solution to keep people charged and connected while on the go,” said Christian Haze, Product Manager for XPAL Power / PowerSkin®. “PowerSkin’s® slim-fitting silicone case is soft to the touch, yet ruggedly durable, also packing a powerful punch – extending talk time nearly 4 hours.”

The HTC One S PowerSkin® features 1500 mAh of battery-boosting power, an on/off button allowing users to choose when to activate a charge, LED lights indicating battery level remaining and charge status, along with the ability to sync the phone directly to computers via an included cable.

The HTC One S PowerSkin®, $69.99, is available beginning today on www.Power-Skin.com with a $10 discount offer redeemable using promo code: PSHTC123.