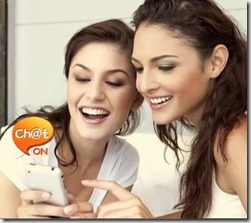 Samsung is holding all it’s surprises for Tuesday when they let the cat out of the bag (officially) with the Galaxy S II devices coming here to the United States. Today they started having some fun by announcing ChatON which is messaging service that will not only be for Android as you might have thought, but iOS, BlackBerry, and Samsung Bada OS platforms. If that was not enough, Samsung will be releasing a web based PC version also. No word for Windows Phone however.

ChatON will allow users to send a text to one person, start a group chat, group message, share images, as well as voice messages. Not only will you be able to share all that with your friends who speak the same language, but try 62 different languages across 120 countries! Having an iPhone, I really miss having groups to text quickly, ChatON will take care of that pesky problem plus do it with style with animations and a slick looking UI. You can even text animations which you can customize. Definitely looks cool and something I will be checking out in September when it officially launches. Check out the video for more information: