Yes, you heard it right. Steve Woznaik, Apple’s co-founder, went on saying that Windows Phone is pretty and cool. He has given few reasons why Windows Phone is beautiful and intuitive than iPhone and Android. He went to AT&T store recently to get a Lumia 900. 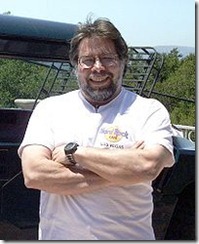 He tweeted few days back via foursquare saying that he was waiting at AT&T to check on Nokia Lumia 900. Of course there was nothing from after that and we don’t know whether he got one or not. But it seems he got one and loves it. He is a true gadget geek and his review definitely means something to world. He is known to carry multiple Android phones in addition to iPhones.

A New Domain’s Gina Smith met “Woz”  along with Todd Moore at Togo’s for a lunch in San Francisco and called KoPoint’s Dan Patterson to talk about his passion for gadget. From the talk they found he likes Lumia even though he prefers iPhone. Here are some of the interesting points from the talk:

“….I’m just shocked, I haven’t seen anything yet that isn’t more beautiful than the other platforms”

“Apps look more beautiful than on Android or iPhone”

Here is my take on this:

The first point – Both Verizon and Sprint should be shamed of not supporting Windows Phone with full heart. And AT&T reps who still downplay Windows Phone should be slapped on their fingers.

Second,Third,  and Fourth points – Steve Jobs would have been crying if he were alive. I know all the Apple fans would be cursing “Woz” by now.

Fifth point – This makes iPhone fans not happy at all.

Sixth point – I know what Google would do next. Make a clone of Windows Phone. And Google fanbois and gals who always say Metro is fugly would claim Metro is the next best things since sliced bread.

Of course he also said that the app selection is limited and even though he likes Lumia 900 over other phones, he still prefers iPhone 4S because of app selection and utilities.

Via: The Report, WPCentral, msn Now