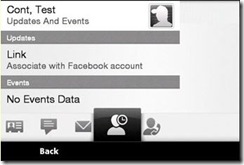 I know you’re probably still drooling from the video of the TF3D porting from the TP2 for the Touch Pro but there is a noteworthy news update. I am quoting xboxmod who has taken the lead in porting (and organizing a team of assistants) "i hope to release this in 1 week if all is ok". That was written yesterday. Also, take a look at the picture and you’ll see the new contacts tab so when you select a contact you can see the emails, texts, phone calls,etc for that contact which is a great time saver.

So, let’s all agree to be excited but if it takes longer there’s no complaining since xboxmod has taken this on to help the community (he doesn’t have a Touch Pro in fact). Also, don’t go to the XDA thread and ask when the release is coming; you know when your boss asks you every 5 minutes for something and that just pisses you off and makes you less productive? Well let’s not do that:) Also, since this is a pretty phenomenal update that is not just difficult but very time consuming, you may consider buying xboxmod a cup of coffee for his work and efforts (maybe it’ll help keep him up late and knock it out faster as well:) ).

Ok, now that we all agree to those rules get the champagne ready and keep your Fuze charged at all times just in case it gets released early:)

I Played With Flashing Fire And Didn’t Get Burned