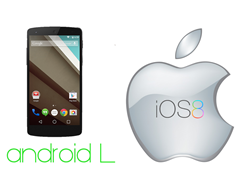 I saw a pretty interesting article on CNET over the weekend that was stating 9 reasons to get excited about Android L (pictures). Click the link to head on over there and read about it if you don’t already know the Android L new features but it got the Mobility Digest team talking and I thought I would share some of our thoughts and hopefully get some of your thoughts. (hint: please leave a comment)

DSmithZ28: There is some pretty cool stuff here but I am pretty sure Apple already has patents on it. LOL

Murani: I thought the Do Not Disturb feature been in Android OS but guess it was just my assumption. The design language will be subjective and although it might be an improvement it doesn’t warrant an inclusion as an exiting feature. That whole work/personal profile switching thing is okay but again not exactly exciting. You know what is exciting though? Getting low cost Android phones to be auto awesome as their Android One program seems to suggest. Once you give a wearable that is verified a free pass to unlock your phone that is a trouble sign and any law enforcement officer will tell you that. Way too many scenarios where they can and will come back to haunt the user. I like where Android is moving to but that list is poorly conceived.

Stephen M: Is it me, or are those multitasking cards look oddly reminiscent of webOS?

Murani: Yes they are. I don’t know how they are supposed to make multitasking faster either.

DSmithZ28 (via Facebook): Hope Apple gets better at some of this in ios8

Chris L: iOS 8 does a lot of those things, but some of the ones that talk to multiple users (useful for a tablet, but for a phone?) it doesn’t do. iOS can do per-app VPN settings, and does a lot of other really cool new features. The lock screen is a lot smarter (reply to messages, send and receive audio and video messages, etc), interacts seamlessly with applications on your macbook or imac, and recommends installed or new apps based on your location (United app at the united terminal at the airport, bestbuy at bestbuy, starbucks, UPS, etc)

All of these things I’ve been using for months, and they all work great.

So which will win your heart Android L or iOS 8? Would love to get some community feedback in the form of some comment. Hit us up on Twitter too! Mobility Digest Tweets