In an effort to combat fake news Facebook is starting a new project. By labeling certain “media partners” with what they call Trust Indicators.  Sounds like Zuck is throwing as much of his weight as he can into the political spectrum to me, but let’s at least approach this with a discerning, yet open mind.

The actual UI changes to Facebook are going to be very small. So small that, with the average amount of fact checking that normal Facebook users’ are known to do, I doubt it will have much impact. Next to news articles, Facebook will now place a small “i” icon next to the news story. When clicking through you would ideally be brought to such information as an ethics policy (whatever the hell that is in our current news landscape), corrections policy, fact-checking policy, (((ownership structure))), and other supposedly relevant information to the news source.

Facebook does not disclose publicly what publishers they are working with and in what countries. However, Mashable.com was able to confirm that Vox.com (just the primary site, not necessarily it’s affiliates) and Associate Press were part of the program. Facebooks limited number of participants is designed, in their eyes, to study what sort of effect this will have on Facebook users.

To me this stinks of the same political leanings the Zuckerberg has been trying to pull in the past few years. What sites Facebook chooses to include or, just as revealing, who they choose to exclude, from this new initiative is telling of their particular slant. Associated Press and Vox (not just their primary site) are notoriously left wing and very low substance news outlets. I can sort of forgive them for not including the likes of CNN, MSNBC, and other mainstream media outlets due to their own dumpster fires they keep setting for themselves in the realm of non-sourced “news”.  Am I alone in wishing that the people that feed me information about my friends and acquaintances should not be interjecting in my life politically?

What Facebook misses entirely is that the issue of “fake news” is not only something that major news outlets engage in. The issue is decentralized thanks in large part to social media itself. The ability of individuals to post and promote information to people that are labeled as “friends”, despite how bullshit that misnomer is in the realm of social media, is the crux of the issue. You’ve given a soap box to every unhappy snowflake SJW, but also every gun grabbing pro-life skinhead and everything in between. These users take that soap box and disseminate info to, often, thousands of people that are more inclined to believe them due to their status of “friend”. The monstrosity that social media has unleashed on the world in the form of psychological cancer and a growing addiction to false social validation is at the bedrock of the issue that allows “fake news” to spread organically through its user base like HIV in California. 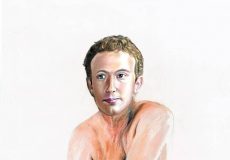