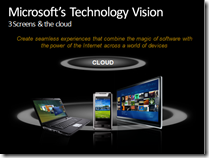 We’ve heard the term 3 Screens and The Cloud from Microsoft for a while but an announcement from the other day is starting to finally paint a cohesive picture of where this is headed. To recap where things stand, 60% of PC’s have Silverlight loaded on them (including Macs) and WP7 is highly Silverlight dependant (except games that involve XNA but that gets onto your tv by a little something called xBox). But where does the tv come into play?

Microsoft Corp. today announced that at the 2010 National Association of Broadcasters (NAB) Show next week, it will showcase new products and initiatives that make it easier for content owners and broadcasters to reach consumers across multiple screens with the highest quality Microsoft Silverlight media experiences, using a single runtime platform, server infrastructure and free programming frameworks. The company announced it is working with system-on-chip (SOC) partners Intel Corporation and Broadcom Corp. to deliver support for reference designs that will provide the complete Silverlight platform to set-top boxes, connected TVs, Blu-ray Disc players and other consumer devices. Microsoft also unveiled details about Internet Information Services (IIS) Media Services 4 and announced the upcoming release of Silverlight Media Framework 2.0.

At NAB, Microsoft will demonstrate how Silverlight for SOCs will enable consumer electronics manufacturers to deliver native Silverlight support in future products. This means that content owners can deliver high-definition programming to the living room with all the benefits of Silverlight and IIS Smooth Streaming, such as adaptive bitrate streaming over standard Internet connections, DVR-like capabilities, and support for Microsoft PlayReady digital rights management, on Broadcom BCM7420- and Intel CE4100-based devices for the connected home. A single Silverlight platform means that developers and content owners can develop one experience that can be consumed across a multitude of devices.

For MS this is the trifecta. A developer can write an app in Silverlight and seamlessly port it to PC’s, tv’s and mobiles. This makes it a very attractive platform and a powerful one as well. It can do everything from delivering streaming content, to simple games and most applications as well. And once connected to the ‘cloud’ you’ll be able to pull your photos across all three screens for example and get the same experience on all platforms.  This is all a good sign for where WP7 is as a platform since it will finally deliver what MS has been seeking for years. The ability to get a unified experience wherever you are.

And this is great “Silverlight for SOCs beta is planned to be available for hardware and device manufacturers to evaluate by the end of 2010.” Anything else planned for the end of 2010? It’s a big year for Silverlight and MS and us as well…oh sh!t, does this mean I need a new phone and new tv? I better start being good now…