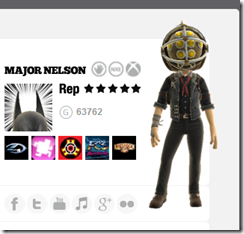 Xbox LIVE’s Major Nelson released an official statement on his blog post addressing the inaccuracies and incomplete reporting that has been popping up on the internet. It is as I expected it to be. Short and to the point. Thanks to Larry Hryb for addressing this runaway train.

Over the paste few days, we have been reading comments and message boards following the Xbox One announcement. There are a few questions regarding used games. I wanted to clarify and provide this official statement: