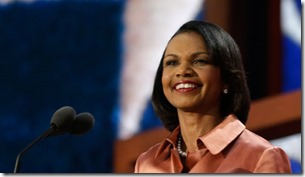 I read the news today, oh boy; about a lucky school that scored an A-list top-shelf high-caliber commencement speaker, Dr. Condoleezza Rice. A real catch, that lady. A real catch.

But a bunch of smelly Occupy-type students and faculty with their tie dye shirts, hacky sacks and drum circles in a fog of THC felt it was their duty to make a ruckus about the school’s selection because she was in the Bush administration and Iraq and yada yada.

They generated such a fuss that Dr. Rice just announced that she felt she had become an undesirable distraction to the graduating class’s special day, that she didn’t want to spoil it, so she backed out.

Now before you conjure up negative images of Bush and the wars, which is pretty easy to do of course, let me pull up and paraphrase the wikipedia page of Dr. Rice, a few bullet points of her resume:

Hailing out of Birmingham (not easy) with roots going back to sharecroppers, proficient in figure skating and ballet by age three. Learned piano by age fifteen and accompanied Yo-Yo Ma. Not bad, right?

You get the idea. A few snippets from her life so far. A brilliant, brilliant black woman who worked, and worked hard, her way up to the top. It’s fascinating, but takes a long time, reading about all she has accomplished; and judging by her elegant, vibrant looks she looks like she’s just getting started.

Here’s a parallel hypothetical, imagine if it were Justice Clarence Thomas (also black). If you studied Constitutional law you’d know he has an impressive track record of hitting the breaks on judicial activism, a defender of the Commerce

To remove black this and woman that from the equation I’m trying to present, and to add a dash of politics, if this were your school, would you rather have this woman at your commencement or John Kerry? Please don’t say John Kerry.

Justice Clarence Thomas (also black with a similarly-impressive resume) has done a bang-up job reigning in the Court’s abuse of the Commerce Clause and judicial activism, and has been regarded more left-leaning than right. No dummy, no stranger to scandal, and he’s been helpful to our country. But he was appointed by a republican (George H). Now suppose your university managed to get him to speak at something or do a guest lecture in a Con Law class you didn’t even take, could you picture yourself making a bunch of nasty signs and organizing rallies against his arrival?

Regarding her republican ties, which of course is not what you’d expect from any black person that’s not on the Fox News payroll, and criticisms of whatever involvement she had in pushing for war, perhaps that is one of the things she would have addressed in her speech in a manner that was provocative, informative and placating to the hippies. Maybe she would have talked about making a career move that would predictably subject herself to attacks from all angles, and whether or not it was worth it.

Or perhaps she just wanted to get up behind the mic and inspire everyone, not just black females, to work hard, enjoy life and so forth, eloquently. Or maybe a curveball and turn the thing into a big Q&A “AMA” session, exposing herself bravely to hecklers. Whatever she had in mind, it would have been delightful. Perhaps she’ll release a copy of the speech she would have given, though she would have had enough material to wing it impressively.

I had, luckily, the late, great Tim Russert speak at my graduation but I would have traded up in a second for Dr. Rice.

Man this pisses me off! Damn hippies, you done goofed and you screwed your entire university.  Might I suggest the next time you let the person speak and then decide whether or not to go on a hunger strike?

Is Skype The Next Communication Standard