Fresh new ideas are always the life blood of a successful company in my opinion. Paying engineers, research teams, and millions on marketing is fine, but it sometimes happens that a kid has the best way to solve a problem and come up with something new and innovative. Such is the case with Dino Zaharakis, a 12 year young man who would innovate a dock that would gain international notoriety. Dino, the creator of dzdock, is a docking solution for the iPad and iPhone but will fit just about any smartphone or tablet and conquers several design flaws that he saw in docks available today. Dino’s dock was to:

Dino’s dzdock did just that and as a result, he has won several awards including Global Student Entrepreneur Award for High School as well as the "Most Innovative Product" award at Chicago’s McCormick Center. Men’s Health Magazine named dzdock one of it’s five best stocking stuffers. Not too shabby Dino.

The dzdock sells for $29.95 on Amazon but can be purchased from his own website for just $19.99 using the  promotional code ("EOGSEADZ") which is good through the end of the year.

So if you are needing a dock/stand for your iPhone or iPad, check out dzdock on Facebook, or head on over to his website for more information. 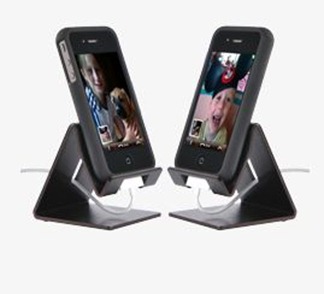 iPads with retina displays and iOS 6 caught on server logs