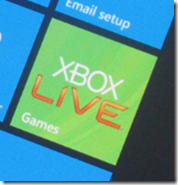 Undoubtedly, Microsoft has been advertising Windows Phones as an Xbox phone. Not just on commercials but when you go into games you have to actively work to get beyond the Xbox Live titles. We all know some of the flaws to this, with titles like Pitfall being highly promoted. But one app that made waves as Chicks’n’Vixens which is a sold Angry Birds clone. It was denied Xbox Live status and the developer went from a free version to a paid version. At that time, it was one of the top games in the entire Marketplace. So, did it pay out? Apparently not. Here’s the entire post by JabberWorx whose games include Chick’n’Vixens and Meteor Mania:

Let me preface by saying I love Windows Phone 7. I love the OS, the dev tools, the community behind it. It’s a fantastic OS and very hard to fault. Rock solid operations and extremely smart UI and hardware button choices make it easily the best phone I’ve ever used. I want this OS to succeed and I want very dearly to contribute to its success and that is my biggest (and really only) motivation for making this post.

I’m writing this post as a warning to Windows Phone 7 developers who have a commercial interest in the platform and want to develop exclusively for it. While it is indeed possible to make money on WP7 creating a relatively high budget indie game (say anything over $500) will probably not pay good returns unless it has XBL support and marketing.

Microsoft has spent quite some time selling WP7 as a product for you to play XBL games on. It is therefore reasonable to assume people who buy WP7 for gaming are doing so for the XBL games, not your non-XBL game. By extension to this basic fact your game as it exists on WP7 is simply there to pad the numbers of apps on the store.

While Microsoft has been doing everything it can to market WP7 as XBL on a phone I don’t think that’s solely to blame for poor indie sales on WP7. The fact of the matter is XBL games get much more exposure both in the market place and advertising of the device, they get even more exposure than the popular games lists. An XBL game released in any given week will have more exposure to market than a game that is #1 on a popular list. I’ve actually come across some users of WP7 who weren’t even aware it was possible to download free and non-XBL games on WP7, they would just hit ‘get more games’ in the XBL Hub and scroll down the list they were given.

I used to think that if a game did go up far enough the popular list the exposure it would receive would be enough to guarantee it success based on its own merits. However I was wrong, and I found out the painful way with Chicks’n’Vixens. Despite the game being ranked #1 for well over a week the sales were simply appalling. My gut reaction to this was ‘well it’s a small install base’, but then I got the sales numbers of a select few XBL games. Let’s just say it was an eye opener. Please note I’m not the only indie developer complaining about poor sales. What’s sad is if the WP7 market was 10 times larger than it is XBL games would still be getting 10 times more downloads. You’ll always be getting a very, very small piece of the pie. It just doesn’t make sense when there are alternative platforms which don’t cut your legs off then blame you for not being able to compete with big publishers.

I’ve received a few emails from gamers who have requested XBL support for Chicks’n’Vixens, saying they wouldn’t pay for it otherwise. Some even asked why so many developers weren’t making their games XBL as they wouldn’t buy any non-XBL games. Apparently a lot of gamers aren’t even aware that XBL support is not the decision of the developer. This misconception is understandable, at least with Apple it’s quite a bit easier to have Game Center support integrated into your game, no doubt many gamers think the same would apply to WP7. Perhaps Microsoft should be more clear about that so that developers are not accused of being lazy for not having XBL support in games.

Some might argue that it’s simply a matter of trying to gain XBL support for your game. This wouldn’t be a bad thing, in fact it would be great, however despite what Microsoft says the XBL library really isn’t about having a portfolio of diverse and quality games. It’s simply about having XBL on a phone as a selling point. As such getting your game XBL support is not tied to the quality of the game you make it isn’t even tied to the uniqueness of the game you make, the way Microsoft sees it it’s about the familiarity of the game. There’s only two ways to have familiarity for your game: if it’s based on an existing and popular franchise or has found success on a different platform (such as iPhone or Android). I’m sure it’s possible to get your completely new and unheard of indie game XBL support but it’s not something you should be betting on, no matter how hard you work on your game at the end of the day the deciding factor for XBL is not based on the merits of your game.

If you’re interested in WP7 games development and are interested in making money the best route to go would be low budget ad supported games. The reasoning behind this is that if you’re making WP7 games as a proper indie you’re going for scraps. Keeping reasonable expectations in mind you’re much more likely to succeed. If you want to make a large game keep in mind to make it multiplatform, that way if it doesn’t get XBL support you have Android/iPhone sales to fall back on. Doing this can be made easier by using something like MonoTouch/MonoDroid coupled with an XNA port, such as ExEn.

When I started with WP7 development I wanted to be an exclusive WP7 developer. I reasoned that while I might not make that much money there was still potential to make a lot of the money I invest into my games back, especially considering there are many high budget XBL games on WP7 (and no doubt they were being made because they were generating revenue). I still maintain WP7 is great to develop games for, it’s simple, streamlined and above all it’s fun. I just don’t find it economically viable without XBL support and I don’t think non-XBL games, no matter the quality, will ever be wildly successful.

For those interested here’s a graph of the Chicks’n’Vixens download numbers (I can’t think of anywhere else to post them so I’m posting them here), and no, I have no idea why the downloads free fell on the 22nd of March, Microsoft support says it was incredibly strange it did but they couldn’t find anything wrong on their end, I guess it was just a really bad day?

*Chicks’n’Vixens is currently ranked #10 in the US App Store. 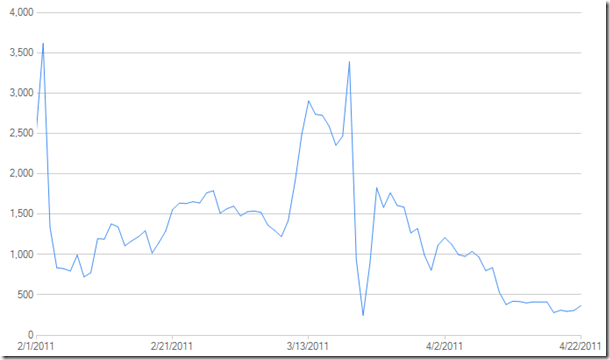 Hypership Out Of Control: Retro Space Action For WP7