I got bored with Android, I still have my Captivate though, I just keep it around just in case as I like to have a spare phone. I still like Android and I think I need a good Android phone to make me happy with the platform again. Anyway, HTC is coming out with the One and One X which I think might fit my needs. To prove a point and just be rather awesome, HTC did a skydiving free fall fashion shoot and used the new One and One X to film it all. I think it’s really cool. Read on for some pictures and more details about the event. 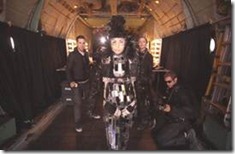 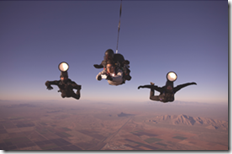 To launch its new HTC One series, HTC, a leading global designer of smartphones, has put a consumer at the heart of its’ latest TV commercial by challenging one to capture the world’s first free fall fashion shoot on a mobile phone. The campaign, which kicks off in the UK on 5th April, is designed to push the boundaries of performance for the mobile handset and its camera capabilities by demonstrating that it is possible to capture great shots whatever the environment.

To really bring the shoot to life, HTC challenged Nick Jojola, an amateur photographer, who had never skydived before to capture high production fashion imagery on the HTC One handsets whilst freefalling at 126mph. This not only delivered an unforgettable personal experience but it also created an amazing real-world product demonstration.

Filmed on location in Arizona, by skydiving cinematographer Norman Kent, the shoot features world champion skydiver and model, Roberta Mancino. Shot at dusk and dawn this complex and demanding advertising creative is designed to bring to life the simultaneous video and photo capture functionality and instant capture capabilities of the new HTC One™ handsets. Both the HTC One™ X and HTC One™ S challenge traditional digital compact cameras by delivering a range of features including high quality images even in low light conditions, instant image capture, auto focus, burst mode and backlight HDR technology and the ability to take stills from already shot HD video footage that operate effectively in both normal and adverse conditions.

This adrenalin-filled shoot, which took place over 35 jumps, featured a team of nine skydivers including our amateur photographer, who had never done any commercial photography before, let alone a free fall sky dive! The dive team also included key members of a high fashion photography crew such as lighting experts, mid-air make-up artists and divers carrying smoke machines to create that all important ‘hero shot’ 12,000ft above the ground.

This sophisticated creative was styled by LA Times Stylist Hayley Atkin, who dressed Roberta in a Martin Izquierdo creation (renowned for a number of Hollywood costumes including the latest Spiderman outfit). In this instance, Izquierdo created a futuristic mirrored bodysuit, featuring 75 individual pieces of plexi glass, and a beautiful jacket with hundreds of oil slick coq feathers individually hand sewn to withstand extreme wind conditions. The outfit was completed with a pair of Giuseppe Zanotti heelless shoes. Hair and make-up stylist, Adam Breuchaud, was responsible for creating a look which could survive a 12,000ft fall at 126mph, which he achieved with a swept back ponytail, with dramatically dark eyes and nude lips.

The creative was developed by global ad agency Mother, and directed by Sara Dunlop of Rattling Stick Productions.