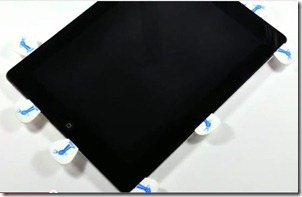 I know that  a lot of people are using their shiny new iPad as we speak and probably the last thing any of them are thinking of is what they are going to do should their battery fail or screen gets cracked somehow. Yes repair is possible but hopefully you opted into a Best Buy Black Tie replacement deal or got some kind of warranty with it. I have gambled and lost not getting the Black Tie from Best buy but it also seems that when I do buy it, I never need it. For my 16GB New iPad the cost would have been $100 dollars from Best Buy or 20% of the value of the product. I passed knowing that it would be encased in an OtterBox Defender for $90 dollars.

So iFixit.com tears down the new Apple iPad and tears Apple a new one for being unconcerned about the environment and encouraging our “Throw Away” culture with a design that does not allow repair facilities to easily get to the battery  or replace the glass should it need to be replaced:

Here are three ways we hoped the new iPad would be more repairable (but wasn’t):

The iFixit Folks give the New iPad a reparability rating of 2/10 which is not that great. They have even downgraded the iPad 2 to the same rating of 2 after spending the last year working on the iPad.

Here is the iFixit spokes person MJ explaining what they think Apple should do to be more responsible to consumers and to the environment:

Here is the tear down video, enjoy!: