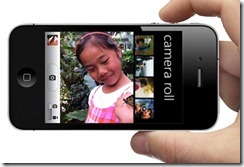 This is a pretty cool trick that works in the Camera app on iOS 5: Simply swipe your finger from left to right to bring the camera album roll up. Continue swiping from left to right to flip through your images. If you go too far, tap once to reveal the on-screen toolbar with image controls and hit Done to immediately return to your camera.

For anyone who uses a Windows Phone that sounds like something you are already familiar with and Microsoft knew it would be loved so they protected it with a fancy ass patent. Here’s patent #20110119619 filed on February 15, 2010:

I know nothing about patent law but that’s pretty spot on there. Now I don’t want to hear about how Microsoft is a patent troll. Let’s focus on how Apple has stopped innovating and it’s becoming clearer that the ‘revolutionary’ iPhone is something to be talked about in the past tense. The OS is showing its age and as flattering as this may be for Microsoft it’s also their core business – making software and profiting from it.

I know, Apple is so good they don’t sue over silly patents like the one they have against Samsung based on the fact that both the Tab and the iPad look like an app launcher (come on where is Palm-HP suing them both for copying the Treo’s interface?). Anyway, between the use of Azure, the royalties they get from Exchange support and now this, it looks like iOS 5 will be a great success for Microsoft.