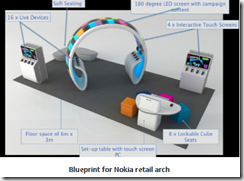 Nokia is clearly on an advertising blitz and they’re not stopping. They’ve just added an installation that is at the entrance to the London Olympics that will showcase the Lumia Windows Phones to be handled by all of the international visitors. You can also expect the phone to be loaded with maps of the Olympic village:

The new Nokia Lumia phones will shine at the London Olympics 2012 site from today where up to 750,000 people a week will be able to get hands-on with the handsets.

A headphone-shaped arch like the one unveiled at Nokia World 2011 has been installed at Westfield Stratford, the shopping mall located at the gateway to the Olympic stadium.

The innovative retail experience, which opened yesterday, will be seen by visitors from all over the world and is set for a global launch.

It is designed to allow shoppers to see, touch and play with the Lumia 800, ask questions about it, and then go to one of the nearby phone shops to buy it.

The new owners will then be free to go back to staff at the arch for help to transfer contacts and other media from their old phone.

The outside of the arch is a screen which carries information and advertising for products, making an eye-catching attraction for customers.

The Lumia 800 would be an ideal phone to use at the Olympics because of its amazing camera and Maps software which will guide users around the site.

Everyone with a Windows Phone knows that once someone plays with one they’re sold on it so this is a great way to get a lot of people to go hands on and generate sales.