Looking for a fast microSD card? Look no further than the world’s fastest from Sandisk with speeds of 96mb/s read and 90mb/s write. I certainly like the look of it, I have dark brown carpets and when I drop and microSD card it’s really hard to find. It’s about time someone colored the cards I think.. 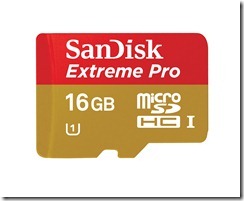 The SanDisk Extreme Pro microSDHC UHS-I card is available on www.sandisk.com in 8 gigabyte (GB)5 and 16GB capacities carrying MSRPs of $59.99 and $99.99. The card is compatible with any microSDHC-slotted device and is ideal for UHS-enabled smartphones and tablets.