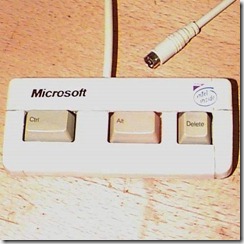 The keyboard was designed with the width of hands in mind and the QWERTY keymap with typewriter hammer jam preventions in mind. But when you’re dealing with phone screen that affords a fifth of the space laterally for input, perhaps stuffing in a QWERTY layout for the sake of familiarity is something we may be able to drastically improve upon or scrap it all together and revisit the drawing board to come up with an input system designed ground-up for the phone people.

Good idea. But no, it wasn’t mine, rather it was Michael Fester and the people of 3qubits who not only thought that hard and that far outside of the box but also produced a new soft keyboard minus the keyboard, calling it the 8pen. You gotta watch this, but get pumped first:

They may or may have not nailed the perfect finger input method (I don’t know, I just watched the clip and installed it) but they illustrated pretty effectively that it may be worth while for soft keyboard developers to stop assuming that something with a conventional keymap, whether it’s really good at predicting what you’re trying to say or if you can skate around the keys on one thumb to make words, must be the foundation. That assumption may indeed be holding us back both from typing faster and without getting achy fingers in addition to keeping some of us married to the hard keyboard.

More importantly though, presuming this is fundamentally superior (or heading in that direction), is can they or anyone else keep the learning curve behind anything like this digestible for at least a small fraction of the masses to adopt it with a revolution fully ignited, just just a few curious bloggers giving it a test drive. Didn’t work out so well for the Dvorak keymap and that was just a keymap from way back.

Well I’ll give it a whirl, consider joining me. It’s on the Android market for about a buck fifty.

ABOUT US
Stay connected with all the latest tech news with Mobility Digest
Contact us: contact@mobilitydigest.com
FOLLOW US
© Copyright 2016 - Mobility Digest
MORE STORIES
Google and Android

Verizon doesn’t seem to know anything about Android (or likely any...