Every loves to shop, and ShopSavvy helps you shop better, and now it’s been updated for Mango to help you even shop better. Shop better? Shop Better? That sentence just reads weird, it could be because I’m tired while writing this. Anyway, the new update improves and brings about new features to the WP7 app.

ShopSavvy, the top shopping app on the iPhone and Android platforms with more than 20 million downloads, was initially released for Windows Phone in December 2010 and has been one of the most popular apps in the Windows Phone Marketplace ever since.

New features in ShopSavvy for Windows Phone include:

Microsoft has called it the “largest and most feature-packed software refresh to date.” It was made available starting Sept. 27, with most customers expected to see their update message over the following several weeks. 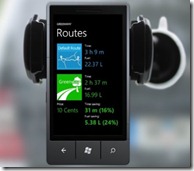 Greenway finds the most efficient route to your destination