Video games pretty much kick every variety of ass available.  This is just a fact.  The best video games do far more than put the boot to proverbial butt.  They will eat away those tiny minutes of your day you feel like don’t matter until they bleed together into a four to six hour a day habit you can’t seem to kick.  This is one of those games.  Maybe not for everyone, but this game is currently the monkey on my back and I’m loving every second.

So what you’ve got here is a classic RPG game in the vein of your original Final Fantasy and other 80’s and 90’s games.  Throw together a band of 4 adventurer’s from 7 different classes and you’ve got a recipe for awesome.  You’ve got Cleric, Sorcerer, Paladin, Juggernaut (Bitch!) Theif, Archer, and Warrior.  You can make up any combination of these you would like, even picking two or three of the same character class.  As you play through, each of these characters have special abilities and variations in stats and their advancements from each level.  This gives you a lot of variety in how you approach combat based on your team building skills.  I roll around stomping epic amounts of various monster ass with a Paladin, a thief, an archer, and a sorcerer.  There are other good sets but this is just what I prefer.  Each character class has their own armor and weapons, although some are shared depending on the item, so not only are you upgrading by leveling, but equipment grants ability bonuses too.  Of course you have the traditional array of skill sets: Strength (damage done), Speed (how many attacks and who goes first), Vitality (how many hit points), Focus (how strong magic is) and Spirit (how much mana you have to cast spells).  There are items galore from scrolls (to cast spells once) spell books (to learn spells) potions of various kinds, pieces of the creatures you’ve killed which you bring to this one weird person in every town that collects random animal parts and gives you gold and xp.  On to gameplay.

This is a turn based adventure game, so you can pretty much still play it when you’re black out drunk.  A big win for me and a good portion of our staff.  It also enters a bit of strategy in selecting who to attack with what character.  You align your team into an order.  People at the top get attacked more frequently.  Characters with higher speed go before slower characters.  You select one person to target with an attack, spell or ability.  If the person you’ve attacked dies and you have attacks remaining, they fall automatically on the first enemy available.  This could mean spreading a little of damage out across lots (up to 8) of attackers, or taking out two or three of them, so they don’t get attacks on you next round.  You have to input all your character commands at the beginning of the round also.  This means estimating how much damage each character can dish out a round to maximize whatever strategy you’re using.  It can be the difference between taking out every opponent in one round and taking over three times more damage due to a small misjudgment.  I’ve been playing for more than two months now and I’m still not finished with the main story line.  The map is huge and you have random encounters as you’re exploring the terrain.  You have different kinds of terrain, which doesn’t effect combat but does vary things visually, keeping things fresh.  Even after you finish the main quest, there is a dungeon in one of the towns that changes to something completely random every time you enter and it also levels with your characters, giving this game nearly limitless replay. 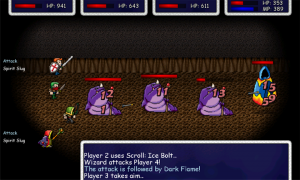 If I give you guys any more information on this game, it’s going to turn into a strategy guide, so I’m going to leave it with this and tell you this game makes even bee’s knees feel jealous of its incredible awesomeness.  The game gets regular updates from the developer so you should be seeing more improvements, new areas and items, new character types, and other awesomeness that can not be conceived of.  Give it a shot.  It’s free, but there is also a paid version without ads at 6.99$.  I gave the man some money, not because the ads were intrusive, but because this guy deserves some serious dough for bringing such an incredible title to Windows Phone.  Get the app here.