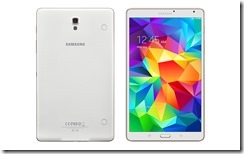 Android tablet sales rose 11 percent to 36.8 million in the March – June quarter. That was good enough to wrangle 70% of the global tablet market share. Unless you’ve been living under a rock for the past few years Android’s market dominance is no surprise. With the new Samsung Galaxy Tab S picking up the premium device slack and the various home grown OEM tablets at the low-end of the market is there any hope for Apple to stem the tide? Are we just in an Android world and there is nothing anyone can do about that?

Which Will Win Your Heart Android L or iOS 8?