There is a growing amount of chatter happening about whether Microsoft’s new name patents might be replacing “Metro” for their User Interface. The name Metro was scrapped because of conflicts with a German partner named Metro Group. Personally I never warmed up to Metro much anyway. Appearing not to be in any real hurry to rename the branded UI, which many of us think was a bad idea on Microsoft’s behalf, there has not been any clear branding use since. Mobility Digest Long time contributor Murani states that:

“Not fighting or paying for the use of Metro was dumb. Amazing marketing
should have been done around that. It is an easy to pronounce word that
creative would have had a field day with. Ramon does amazing street
photography. I could easily see a marketing campaign centered around
cool street photography while the beginning and end show Windows
products being the tools used to produce the street photography.”

On December 28th it was reported by NeoWin that Microsoft registered the name “Mod” to it’s list of trademark names for Office Mod and Windows Mod. Mary Jo at zdnet is speculating that this could be the rebranding for the unique and popular UI by Microsoft. Of course immediately following is a declaration that nothing has been confirmed and that none of her Microsoft sources have confirmed.

I was never a huge fan of the UI branding “Metro” and knew immediately that it had little or no real staying power as brand for the UI. I do think that the UI for Microsoft is a major home run for them and separates Windows Phone for instance from other OS interfaces from the likes of Apple and Android which the latter is at least more customizable with Widgets. But none of them get the job done in my opinion like previously known as Metro UI. I am hopeful that “Mod” might be either the branding for the customization ability of the Windows new UI or future customization abilities coming soon but simply naming the UI “Mod” does not do anything for me. 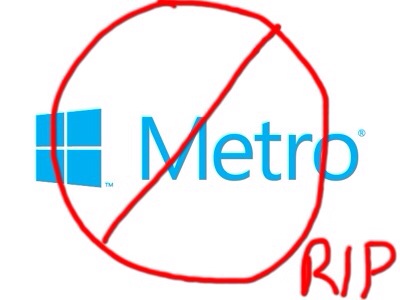