Microsoft’s next evolution with their mobile OS has been in developers hands for a little while now and we have witnessed it’s goodness! Lot’s of updates and more yet to come from rumored updates code named “Tango” and “Apollo”. Okay, we’re excited, but what about the devices? I have been holding off on the HTC HD7s for various reasons and it appears my hunch is going to pay off! It appears if this latest HTC leak is correct our wait will be come an “Eternity” as German website HTCInside dropped the goods on HTC’s first high end offering for Windows Phone called Eternity.

The HTC Eternity will not disappoint for large screen size lovers with a gigantic 4.7 WVGA Super LCD display and enough horsepower from Qualcomm’s MSM 8255 1.5 GHz processor to shot plenty of pictures with the 8 megapixel rear camera and 1.3 megapixel front shooter. Battery in the Eternity will be a 1650 mAh. Another interesting tidbit is the Eternity is listed as having DNLA capabilities.

So you down with that? 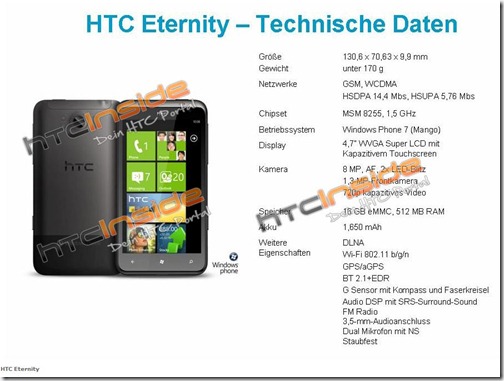 ABOUT US
Stay connected with all the latest tech news with Mobility Digest
Contact us: contact@mobilitydigest.com
FOLLOW US
© Copyright 2016 - Mobility Digest
MORE STORIES
Windows 8