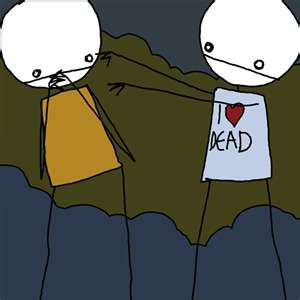 My room mate is all about some zombies and in my quest to convert him from Android I scour the Windows Phone Marketplace for games aligning with this interest.  One such game that caught both of our interests was a digital remake of the board game Zombies!!!  Those not familiar with this game should familiarize themselves quickly, otherwise I’m not sure what you’re doing with your life.

For those of you not fortunate enough to be “in the know” this is a tile game for multiple people.  You start with square tiles that have city blocks printed on them.  These tiles are drawn one at a time by successive players and must be lined up with existing tiles to make a coherent map.  In other words the streets need to match up from one tile to the next.  When you place these tiles you also populate them with zombies for the players to contend with on their way to survival or rescue or whatever your aim is.  There are also “special” tiles you draw where things get a little more interesting.  Special tiles are usually businesses or government buildings like a drug store, police station, or even sporting goods store.  When these tiles are placed you usually place two or three more zombies than your typical tile, but also some much desired supplies.  I’ll explain these supplies in a moment.  After the player places a tile and populates it, the player is able to move.  The player rolls a six sided die (d6 for my nerds out there) that tells you how many squares you can move your player.  If you move into a square with a zombie you have to kill said zombie by rolling at least a 4 on the die.  You roll 4 or higher, you kill the zombie and move on.  You roll 3 or lower and you have two options.  You have a set of supplies right out of the gate in the form of bullets and hearts.  Hearts allow you to re-roll the die once for each heart.  Each bullet adds one to your die roll.  If you roll a three and have bullets, you can use one to succeed on that roll.  If you don’t have enough bullets to win the roll you must use a heart to re-roll.  No hearts? Well then you die.  Not a huge deal because you just start over at the first tile that was laid down.  This makes it a little difficult to win though, since you have to either call a helicopter or kill 25 zombies.  Dying is not conducive to either of these activities. You also get these cards, three of them.  Each one does something weird.  For example, the shotgun card adds two to your roll against all zombies for that turn.  After the player makes his move he rolls the die again and this tells you how many zombies you can move.  Zombies always move one tile but you could move anywhere from 1-6 zombies depending on your roll.

Now that I’ve enlightened you and fulfilled your boardgame fantasies, we can move on to the digital iteration on the phone.  Everything is the same as far as mechanics go but you get the benefit of bots or cpu opponents since you spend your adult life playing boardgames about zombies.  If you are lucky enough to have a physical companion that doesn’t loathe your addiction to electronics you might be able to convince them to play.  This is where the game really shines.  With up to 6 person multi-player you can’t go wrong.  The graphics are awesome and gameplay is smooth.  I wish they would institute some turn based system for people who have the game on two phones.  Another problem is the game only supports the first player’s (always the phone owner for obvious reasons) Xbox live account.  I did have a problem one time where it did not load the graphics for the tiles but did everything else fine.  Did a quick restart and had no further problems.

All in all, two thumbs up for a pretty cool time waster.  Usually something I pass around while me and my buddies are waiting for food somewhere.  There is always something to talk about and since one person at a time goes it allows for side conversation as well.  Worth the money if you dig the zombie stuff or just a solid and semi-casual game for everybody.