I want an HTC Titan but my AT&T contract isn’t up until February and I’m not one to pay full price for my phones, I haven’t yet and I don’t plan to start now. I know a couple of the guys on the mDigest team have one already though, but I haven’t heard anything about their battery life yet. Anyway Mugen has just announced their new battery for the HTC Titan that will give you 22% more power or usage time or capacity, however you want to look it. Price is $44.95 and I’m not sure how that price compares as it’s been years since I’ve bought a battery for one of my phones. 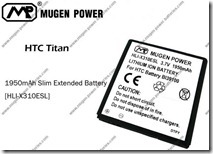 HLI-X310ESL is a Lithium-ion based battery. Lithium-ion based batteries have found widespread popularity in all kinds of consumer electronics because of their high energy to weight ratios, lack of memory effect , and low discharge when not in use. HLI-X310ESL has 20% more capacity than the standard battery. It provides longer battery life with higher quality for power-hungry consumers. Besides extended battery life, HLI-X310ESL is also very reliable. It has undergone vigorous QA procedures and has CE and RoHS approval, just like any other Mugen Power product. Mugen Power Batteries is a well-known leader and innovator in the battery industry.

Pricing and Availability
HTC TITAN extended battery HLI-X310ESL is now available for a special price of $44.95 from Mugen Power Batteries with Free Shipping worldwide at http://www.mugen-power-batteries.com/htc/htc-titan/mugen-power-1950mah-extended-battery-for-htc-titan.html

Sprint to throttle bandwidth this summer?