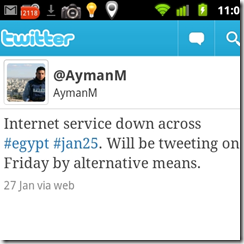 Because the Egyptians rallied up this Berlin Wall-like massive and protracted protest using Twitter and Facebook relaying information not just between each other but with the rest of the world, the government instructed all ISPs power down their routers (3500 of them) shutting everything except POTS and voice cellular phone service down.

That hasn’t been doing the trick as you can see here. Internet providers across the world are opening up modem pools so that those who can call internationally either over their phone lines or by using a modem over Bluetooth over their cell phone’s voice channel may connect, though for a steep forty or so cents a minute, and lists of those numbers are being circulated. The Germans have set up a faxing operation to relay fax transmissions to Twitter and email.

They are using ham radio for Morse code to reach other countries, using IRC and Wikis to coordinate which bands to switch to when one is jammed, too crowded or is otherwise interfered with. The most recent communication over radio: "internet not working, police cars burning"

The Egyptians are using Tor for anonymous encrypted proxy network communication, as well as the Https-Everywhere and Noscript plugins for Firefox. International dial-up over cellular must be painful enough – imagine adding such encryption layers on top.

They are using telecomix.org’s IRC server (Swedish) to relay instructions on where to go to find mirrored material, to offer the press information, to hand out VPN and proxy addresses and to coordinate their protests, giving instructions for circulation on, for example, what to do when you get hit with tear gas. In the streets they may be using a P2P Bluetooth network with their phones, something that cannot be practically muted in such a context.

That’s a lot of resourcefulness and determination. They already had had practice with the Bluetooth tricks, relying it to send flirtatious text messages to each other surreptitiously. I imagine this protest would have had trouble building up much momentum without this. With our own government reconsidering an Internet kill switch, to some it may be comforting to know that it’s apparently impossible to deny the nation of enough means to communicate to prevent citizens’ freedom of speech, assembly and to rally up militias (amendments one and two), for better or worse.

Windows 8 at a Glance (Video Tour)