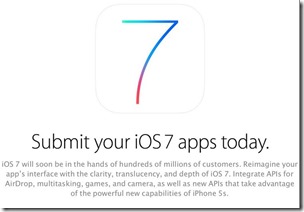 As almost everyone knows by now tomorrow will be the launch of Apple’s 7th mobile operating system called iOS 7. Apple is calling it a total overhaul and while some are not so convinced about the overhaul suggestion to their dated OS, App Developers are forming up ranks to reintroduce new versions of their software to charge you a second time!

According to Gedeon Maheux, co-founder of The Iconfactory and Twitterrific:

“There’s little doubt that the majority of iOS 7 updates to existing apps will be free (which will please Apple), but I suspect there will be a surprising number of developers who will use the launch of the new operating system to completely re-boot their app, and why not? The visual and interactive paradigms iOS 7 mark a natural breaking off point and a perfect opportunity to re-coup costs. Some existing paid apps might even adopt an iOS 7 only strategy which means they’ll have no choice but to charge again.”

I am all for App Developers making money and think largely that apps and mobile software are a real bargain. But I am not in favor of shelling out more money for something that has only had a visual makeover. Even a complete overhaul of an app should be included in the price and only if there is added functionality or additional licensing costs should the app be remade into a new version leaving behind the old one.

It’s pretty safe to say that the vast majority of the apps I use will not be charging me again for something I already purchased but I would be shopping by business elsewhere should an app developer try to double dip on me. That’s your thoughts? Should Apple step in our allow free enterprise to continue?