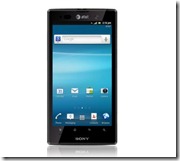 Sony has belted out their first LTE device and it is headed to AT&T. The HD powerhouse XPERIA ION, will not only be 4G LTE powered , but also feature two HD Cameras with a 4.6 inch HD Screen with HDMI out support. I am always surprised about the amount of traffic that comes to Mobility Digest with the Sony XPERIA ARC a day since it seems that Sony doesn’t get a lot of carrier support here in the US but with specs like these, there is no wonder why sop many folks have them:

I have not gotten the opportunity to use the Sony XPERIA ARC but the videos and feedback on the Exmor R camera is nothing short of outstanding. And now with a 12 megapixel camera, it would not surprise me to see the Sony put the Titan II with it’s 16 megapixels camera down for the count in a camera battle royal.

Stay tuned for more on the Sony XPERIA ION heading to AT&T and let’s hope AT&T puts some muscle behind this device. I would love to see Sony cut into some of the dominance Samsung has been enjoying with it’s Android offering! Stay tuned for more from the CES Show in Las Vegas!

Kyocera Reveals the Human Side of Android with the Kyocera Zio...