LG Spectrum is one of the cool and fast smartphones that are coming to Verizon Wireless during 2012. The Spectrum is powered by Android Gingerbread initially that lives up to its name with 4.5”  True IPS  (In-Plane Switching) Screen that is used in LG HDTV sets. 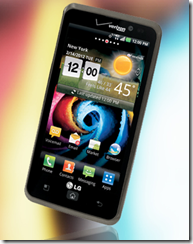 The LG Mobile press release states "Intensifying its HD capabilities, Spectrum by LG will give customers exclusive HD access to the ESPN™ ScoreCenter application. "  LG touts it as True HD.

"ESPN’s ScoreCenter app is supported by an exclusive HD video feed, giving customers the exclusive access to ScoreCenter stats, images and videos in 720p HD. Scoreboards and live game details include in-game stats, news and video. Personalization features allow fans to customize their ScoreCenter experience by highlighting their favorite teams and leagues from around the world, all in crystal clear high-definition."

I guess this phone will fulfill the needs of sports lovers, who can’t glue to their TV sets while their favorite team is playing and they have to work.

The specs of this phone from LG’s press release are:

The press release didn’t stop there, they provided the pricing and availability of this flagship phone from LG on Verizon Wireless.

Side Note: LG and Verizon Wireless are promising that this will be upgraded to Ice Cream Sandwich during first half of 2012, by then Google comes with another sweet flavor of Android for sure and I am not sure why LG always slow in adopting latest version of Android in their flagship phones. And I normally take the carriers and makers words with grain of salt about upgrading Android to promised version anytime.  After spending good chunk of my fortune, I realized the upgradeability officially is a myth in the case of Android phones.

This phone is exclusive to Verizon Wireless.

i-FlashDrive Let’s You (gasp!) Share Files Between Android and iOS