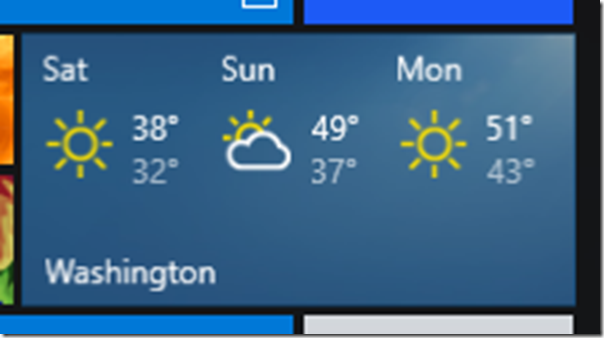 “I didn’t know that”. How many times have you heard those words from a family member, friend or co-worker while helping to setup a new Windows 10 machine. Or, even helping out with a PC that may be months old, or maybe running Windows 10 for more than a year. It’s no surprise. Microsoft has done an excellent job of hiding the fact that they have an; App, Music, Movie, Game Store presence. Unless you are an Insider, or someone who really embraces the Microsoft ecosystem, you wouldn’t know it existed either. Of the 30 or 40 friend and co-worker personal and business Windows 10 devices I have encountered the past year, I have yet to find a single person who knew that the Store existed and was readily available from their machines. A dead giveaway; they are still looking at the weather for Washington, D.C. Or more accurately, they have never even noticed that flipping tile. 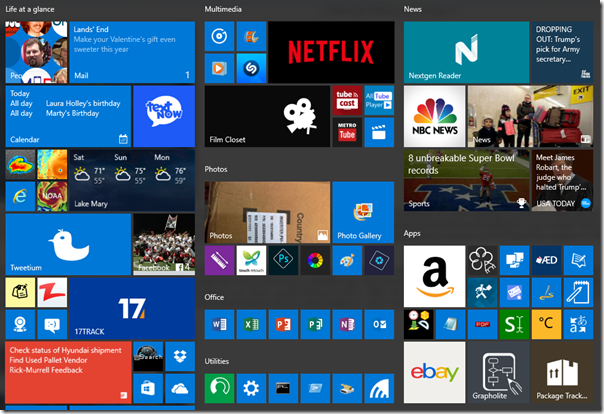 I sort of expected and forecasted this when Microsoft shifted away from the “not to well received” Windows 8.x to Windows 10, hiding all those bright and flippy live tiles behind a button. Most of the users I have encountered have never touched or moved any of the default tiles that WIndows 10 sets up initially. They don’t know they have a Mail app, a Calendar app, or even a News app. And they especially don’t know they have a Weather app. They do click the Start menu button and focus their eyes on the left side of the screen, not brave enough to touch anything a little over to the right. And their eyes light up in amazement when I tap a letter on their Start menu to collapse the jump list and drill down to W. That’s usually followed with a, “Wait, do that again”.  When live tiles were delegated to the Start menu, they even became a little less important for me. Imagine, a new user who had never seen one. They’re not missing anything. Seriously, do you open the Start menu to see the flipping News/Sports/Money tiles to read headlines. I don’t think so.

Microsoft’s on again, off again, multiple resets of their Windows Mobile/Phone/Mobile strategy have certainly not helped things. Universal apps are a good thing. But if everyone left using a Windows Mobile device can fit in a Clown car at the same time, does it really matter. People complain and are dismayed when an important app provider vacates the Microsoft App Store. First Pay Pal, then Amazon (returning with a half baked piece of crap). Followed by eBay. And today the announcement that Package Tracker, an app I have used since it was released, has shut down their servers due to a lack of interest. Sorry, but only Microsoft is to blame for this. Let’s just forget about Windows Mobile and their dwindling user base for now. Anything Microsoft  and developers get from WM users is a bonus, but don’t expect it to pay any bills. Or even pay for a latte at Starbucks. With Windows 10 active on well over 300 million devices worldwide though, can you honestly tell me that maybe 50,000 of those users would not have an interest in Package Tracker for $2.99, if they only knew it existed. That’s 0.00015% of W10 users worldwide. Shouldn’t that be achievable for, say the top 100 to 300 apps (not games) in the Microsoft App Store. After I discovered that Package Tracker was no long syncing earlier this week I went to the Store to look for an alternative. What I found was a limited load of crap. So, here was an app that synced seamlessly and reliably across my 8 Windows devices, provided real time notifications, and had virtually zero competition. And they shut down due to lack of interest. That’s sad. No, that’s criminal. Microsoft should be apologizing to all of us loyal users, while offering to provide free Cloud resources to the developer of Package Tracker. It’s the very least they should do. Shame on you Microsoft for creating a Store and leaving those that try to make it work, out to dry. Oh, and reading about the new mystery OS, Windows 10 Cloud today. An OS that will “ONLY INSTALL MICROSOFT STORE APPS!” This is a non-starter. And if I was an OEM, I would tell Microsoft they were fucking nuts if they thought I would invest one ounce of energy in building something that would run this “dead on arrival” OS. Even the Education and Business sectors would have second thoughts after researching what Store apps actually implies. 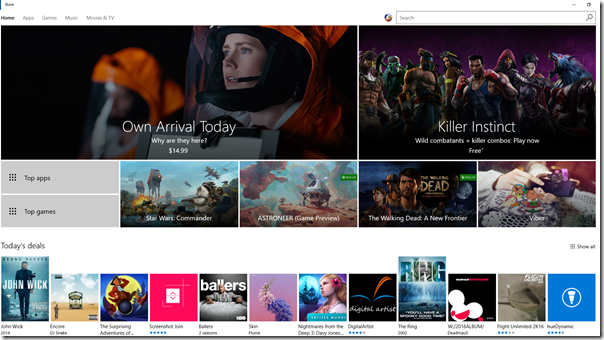 Let’s forget about the PC is better than Mac, and PC is better than Chromebook commercials for awhile. And instead focus on what Windows 10 can do for you. It’s not just an OS upgrade. We in the know, know that. But there are 299,900,000 users who don’t. Time to work, and work hard, on messaging. The three years Microsoft is taking to create the next big thing in mobile computing will be a waste of time if the Store has nothing left except for a few abandoned Microsoft apps. Hell, they might even be able to make a few bucks in commissions, if people start browsing and buying stuff. But I think it’s going to take more than just marketing. While background app updates are really nice, maybe by default a message should popup periodically in Windows 10 informing users that X number of apps need to be updated. Of course, there would be a toggle buried deep in the belly of Windows 10 to turn on automatic app updates, but that’s for us to know and everyone else to find out. The message should be persistent until users click the button that opens the Store, updates the apps and takes people to the main Store screen. Doing this often enough may just get users to stop and look for a moment. It might just help all those struggling developers. Along with all those Fortune 100 companies that don’t think a Microsoft Store presence is meaningful (today, I would have to agree). It’s worth a try. What Microsoft is doing today, or actually not doing, is not working. That’s for certain.