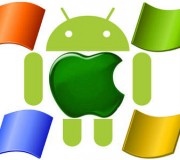 As you know from our infamous MDLeaks series, we have a LOT of internal emails and most of them include insults, threats and system crippling trojans, worms and viruses.

Every once in a while however, an email is sent among our writers group that has some interesting and valuable information.

For instance, we found out that 39.4% of the people that read MobilityDigest on their mobile devices are using an Android powered phone or tablet. And that’s a lot. The most? Nope.

Well, fine, MobilityDigest covers a LOT of Windows Phone information, surely that OS covers the most usage, right? Wrong again. Windows accounts for a measly 3.7% of all mobile usage.

Well, that leaves the elephant in the room. iOS.

iOS accounts for a staggering 53.11% of all mobile usage for Mobility Digest. Broken down, the iPad commands 21.21%, the iPhone 27.27% and the iPod Touch, 4.63%. More people are using an iPod touch to look at MobilityDigest.com than people with Windows Phones.

Why is this? Well, I know why it’s like that for me. The iPhone and the iPad are my primary devices both in and out of the home. When I want to browse the ‘net, watch a video, or play a game, I grab my iPad. If I want a quick consumption of information without much effort at all, I reach for the iPhone.

It could also be that the iPhone is the best selling smart phone ever with over 100 Million units shipped as of early this March. The iPod’s mobile useage numbers could probably be attributed to the fact that the iPod is the number one selling device in its segment. And as for the iPad? Well duh, it’s the number one selling tablet device – ever. Who would have guessed that the best selling devices in their segments would make up the most amount of users…… /sarcasm.

Bringing up the rear in our stats list was Blackberry with 1.44% and SymbianOS with 1.14%. Nokia, Samsung, and LG’s mobile browsers all made up just 1.09% COMBINED.

Have a great iDay.

Tank-O-Mania Comes to the Appstore