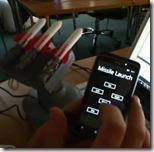 Well, it might be able to launch a full scale nuclear assault but for now it will only make your favorite pet’s life a living hell shooting these Nerf/Foam missiles! The developer already had the missile launcher and a software app and did some tweaking with the SDK he found:

“This device comes with a software app that you can use to control it, but unfortunately it would not work on my Windows 7 x64 system. So, I began searching for a workaround and an “SDK”, and I found it here http://code.google.com/p/usb-missile-launcher/

I immediately downloaded it and after a small trick (compile the lib in x86, so the emulation would work) I got it to work. Suddenly, it bumped to me. Why wouldn’t I create a small Windows Phone 7 application to control the device?

So, it turned out to be pretty easy! I developed a Windows Forms application that exposes some web service operations that control the missile launcher. Then, I created a Silverlight app for Windows Phone 7 that consumes these services and … it was ready! A fun 60’ project :)”

Very cool stuff and as our own Danny Lam stated: “would be awesome if there was a web cam and you could stream video from the launcher to your phone to aim”

Check out the developer, Dimitris blog for more info or to contact for possible end of the world solutions from your Windows Phone!

To do sync in Windows Phone 8