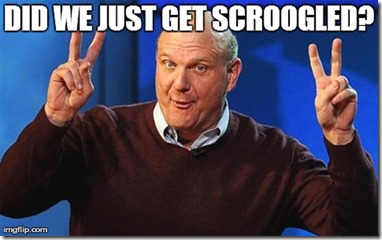 Danny: “Microsoft: We have the right to search your Hotmail account” (updated) [Engadget Link]

Hmmm…. We can’t really trust anyone. Companies reading our emails, storing our SMS, siri storing our voice, apple and Samsung recording our fingerprints, back doors into our computers and mobile phones for government departments to access… But this particular case takes the piss, after the scroogled campaign.

Ram: At least in Microsoft case, they have genuine reason and they did after consulting from legal dept.

Marti: Yup. If you don’t want it known, keep it in your head.

Can we stop fretting over the spying and scroogling (a term which has somehow become applicable when Microsoft is doing the spying)? It will only get worse. Google for example just went HTTPS-only on Gmail, which won’t hurt (and I wish Wikipedia would follow suit, help pressure the likes of China not to block SSL), but the feds can still send these national security letters and they may have access to the inside somehow, not just tapping fiber, of the inside of these companies’ facilities, and they may have more tricks up their sleeves, like having a lot of Google and Microsoft security engineers on their payroll, or the consent of the companies still.

You know what I think about this farcical airplane goosechase manhunt involving 30+ nations flying and sailing up and down, China sending warships, I think these countries are using this as an opportunity for a show of force, a reminder to everyone (including their own people) that they have big expensive things designed to kill people (but can also be used for good) and they are willing and able to gas these "assets" up and join the party for something fairly pointless.

Bunch of peacocks showing off their feathers, while scoring humanitarian capital chasing little blobs on satellite photos, dropping fancy current bouys. I wonder what the total cost of this search is each day. Seems expensive.

While I’m on an unpopular opinion roll, I think Obama needs to shut up about Russia and cool it with the silly sanctions and, like he should have done with Syria, just stay out of it.

Obama, of whom for a while I was a fan and still want to like, is utterly powerless to stop any Russian advances and provocations, even with the European Union getting Obama’s back. He looks more impotent than ever, meanwhile everybody, even some of our own politicians, seem to love Putin. It’s in our interests, and the world’s, for us not to fall back into a cold war, a risk that elevates as the rhetoric ramps up.

Doug Simmons: Or the consent of the companies still.

Seems to me these companies for whatever reason, even at costs of hits to their reputation (and that of the cloud model), are pals with the feds.

Matt: There should be some sort of +1/like/up vote button for emails.  I guess this is that equivalent.

Jimski: Companies have always had the right to check employees email. Just because Hotmail happens to also be used by tens of millions of other users outside the company, does not make it any different.

The conversation is on going. Care to join in? Comment or we are looking for writers and MobilityLeaks group members. Use the contact to send me a request.