Since 2007 or so the average smartphone data consumption has shot up super exponentially. With Android phones, in the past year alone it has doubled to several hundred megs a month. Me, I hit triple digits every single day and so do many of you.

Yet in spite of this demand for more data, there has been pretty much no change in the pricing of US carriers’ international data plans. With AT&T, $25 on top of your regular bill (and on top of the voice package and rates) gets you only 20MB for an entire month and if you manage to break through the limit, you can suck a $20/meg overage. Verizon, roughly as painful. T-Mobile, $15/MB, Sprint, $20/MB.

So if I got really drunk and woke up in Mexico and spent a month there sobering up while using my phone the way I do now, I’d be looking at a hundred thousand dollar bill just for mistakenly thinking I was in Puerto Rico or Spanish Harlem and not south of the boarder. A hundred grand! Damn! And probably more because I’d be using Google Translate a lot with the cloud voice recognition, showing it off to those Mexicans. That would make for a good Banged Up Abroad episode on NatGeo. Nah, too EDGY.

This is on my mind because my folks just went to Europe for a couple weeks. I did what I could to make their phones (AT&T) use data as conservatively as possible, put them under strict orders to keep the phones off when they’re not using it, get the hotels to put them on wifi if possible, plus I have to log into their account every few days to make sure they’re not using too much data because the last time they went abroad for just a week they racked up a five hundred dollar bill.

I think part of the reason it’s so expensive for the same amount of data in spite of that huge consumption growth is because when you’re racing to catch a flight to wherever and you manage to remember to call your carrier to get some international roaming package, you’re not really in a position to get all huffy about it and change carriers, and besides you’re already spending thousands on the trip so what’s a few hundred bucks more just so that you don’t have to get a prepaid SIM. It’s still bullshit though and I’m blowing the whistle on this. Calling you price gouging bitches out – but I’m placing that call over wifi.

Interestingly, Vodafone UK charges a far more reasonable $3.20 per day for 25MB each day within European countries, if you’re traveling longer you can lay down $16 per month for that 25MB per day (800MB/month) and if you step out of Europe, $8/day for that 25MB. Comparatively, that’s fantastic. You can always count on the rest of the world to have much less shitty carriers, technology and nudity availability than the US. What’s up with that? 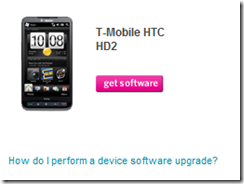 T-Mobile Has The ROM Update For the HD2 Live Again