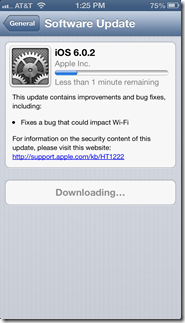 If you have been experiencing some WiFi Woes with your iPhone 5 then today could see some ease to your pain. Apple has released a second update to iOS 6 to version 6.0.2 that you can access from your software update menu or through iTunes.  If WiFi isn’t the only thing on your wish list, Apple is getting ready to release iOS 6.1 in January and it looks to have some enhancements to iCloud with better security, Connect to a Bluetooth keyboard via Apple TV, lock screen music control buttons spaced out and easier to use, Siri will be able to to buy movie tickets, and Apple makes it easier for you to report issues with Apple Maps. Of course you can still count on purple streaks in your pictures as well.

So nothing too fantastic with UI enhancements which will hopefully be a later release of iOS 7 perhaps.